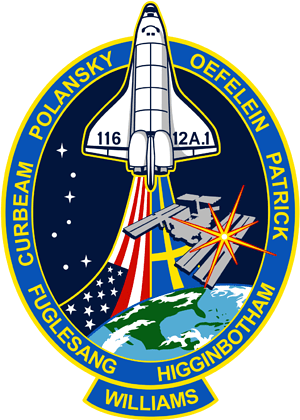 STS-116 was a Space Shuttle mission to the International Space Station (ISS) flown by Space Shuttle Discovery. Discovery lifted off on 9 December 2006 at 20:47:35 EST. A previous launch attempt on 7 December had been canceled due to cloud cover. It was the first night launch of a space shuttle since STS-113 in November 2002. The mission is also referred to as ISS-12A.1 by the ISS program. The main goals of the mission were delivery and attachment of the International Space Station’s P5 truss segment, a major rewiring of the station’s power system, and exchange of ISS Expedition 14 personnel.