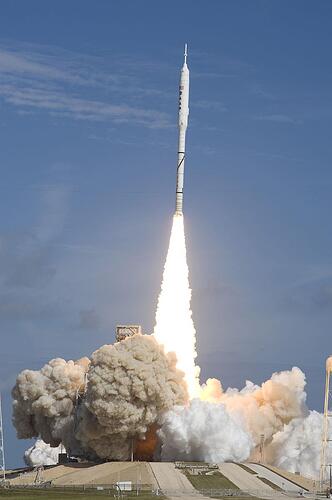 Rising into the Florida sky, the 327-foot rocket thunders away from the launch pad, marking the first time a new vehicle has launched from the complex since …

The Ares I-X vehicle used in the test flight was similar in shape, mass, and size to the planned configuration of later Ares I vehicles, but had largely dissimilar internal hardware consisting of only one powered stage. Ares I vehicles were intended to launch Orion crew exploration vehicles. Along with the Ares V launch system and the Altair lunar lander, Ares I and Orion were part of NASA’s Constellation Program, which was developing the spacecraft for U.S. human spaceflight after the Space Shuttle fleet was retired.