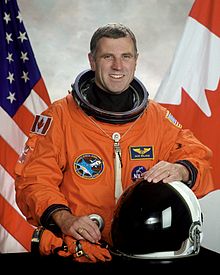 (Traduzione automatica) Dafydd Rhys “Dave” Williams OC (born May 16, 1954) is a Canadian physician, public speaker and a retired CSA astronaut. Williams was a mission specialist on two space shuttle missions. His first spaceflight, STS-90 in 1998, was a 16-day mission aboard Space Shuttle Columbia dedicated to neuroscience research. His second flight, STS-118 in August 2007, was flown by Space Shuttle Endeavour to the International Space Station. During that mission he performed three spacewalks, becoming the third Canadian to perform a spacewalk and setting a Canadian record for total number of spacewalks. These spacewalks combined for a total duration of 17 hours and 47 minutes.