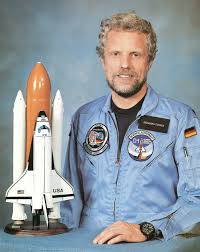 In 1977 Furrer applied for selection as an astronaut for the first Spacelab mission. He made it into the final round of candidates, although Ulf Merbold was finally selected. In 1982, the astronauts for the first German Spacelab mission were selected from the finalists for the first mission, and Furrer was one of the two chosen. He was a payload specialist on STS-61-A (D1), which was launched on 30 October 1985. The other payload specialists on the flight were Ernst Messerschmid and Wubbo Ockels (Netherlands).