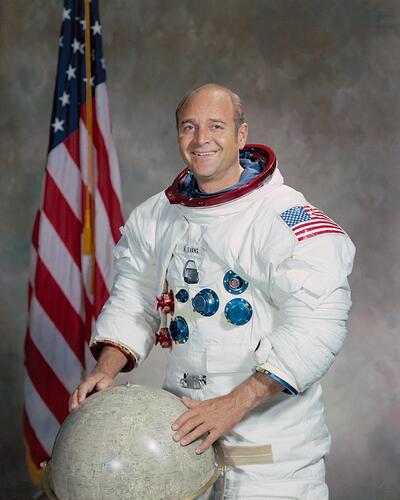 (Traduzione automatica) Ronald Ellwin Evans Jr. was an American naval officer and aviator, electrical engineer, aeronautical engineer, and NASA astronaut, also one of only 24 people to have flown to the Moon.

Evans was selected as an astronaut by NASA as part of Astronaut Group 5 in 1966 and made his first and only flight into space as Command Module Pilot aboard Apollo 17 in 1972, the last manned mission to the Moon to date, with Commander Eugene Cernan and Lunar Module Pilot Harrison Schmitt. During the flight, he orbited the Moon as his two crewmates descended to the surface. Consequently, he is the last person to orbit the Moon alone and holds the record for the most time spent in lunar orbit at 148 hours. In 1975 Evans served as backup Command Module Pilot for the Apollo-Sojuz Test Project mission.