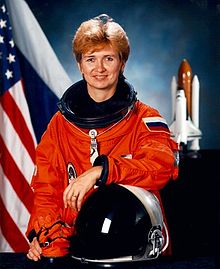 (Traduzione automatica) Yelena Vladimirovna Kondakova (Russian: Елена Владимировна Кондакóва; born March 30, 1957) was the third Soviet/Russian female cosmonaut to travel to space and the first woman to make a long-duration spaceflight. Her first trip into space was on Sojuz TM-20 on October 4, 1994. She returned to Earth on March 22, 1995 after a five-month stay at the Mir space station. Kondakova’s second flight was as a mission specialist on the United States Space Shuttle Atlantis during mission STS-84 in May 1997. She was the last Russian female in space until her successor cosmonaut Elena Serova flew to the International Space Station (ISS) on 25 September 2014.