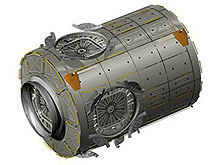 The International Space Station is growing, and NASA’s Node 2 is the next U.S. pressurized module scheduled for installation on the orbiting laboratory. The node will provide more room for station crews to live and work, but it needs a name.

Students in kindergarten through grade 12 attending U.S. schools and children of American personnel overseas are being asked to help NASA name the module and become part of the history of the station. The module is at NASA’s Kennedy Space Center, Fla., and is targeted for launch in late 2007. The node will be a connecting port and passageway to additional international science labs and space supply vehicles. It also will be a work platform for the station’s robotic arm.

Name the International Space Station Node 2 Challenge requires students to work together as a class or school to create their own Node 2 model. Students will name their node, write a brief description explaining the choice and take digital pictures to send to NASA.

The submitted image of the model will not be judged, but it will be the ticket to enter the name challenge. Submissions will be reviewed by a panel of NASA scientists, engineers and educators. The deadline to submit model images and names is Dec. 1. The winning entry will be announced in early 2007. To register a school or class, teachers or administrators should send an email to: NASA-ESC@nasa.gov. For information about Node 2, visit: