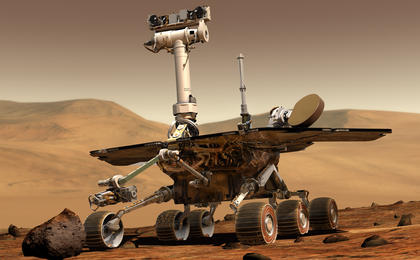 With electrical power from Spirit’s solar array down to about 300
watt-hours per Martian day, or sol, the science team is able to plan
only one major activity per sol and often needs to devote one sol to
recharging the rover’s batteries. (A hundred watt-hours is the amount
of
electricity needed to light one 100-watt bulb for one hour.) Spirit
remains healthy and continues to make progress on the winter science
campaign.

Engineers successfully uploaded half of a new flight software upgrade
and planned to take advantage of overflights by NASA’s Odyssey orbiter
to transmit more flight software files via UHF frequencies.

The rover team created a new technique for correcting drift (changes
with time) in the rover’s inertial measurement unit, which affects the
pointing accuracy of the miniature thermal emission spectrometer. The
IMU provides roll, pitch, and yaw information to the rover. Typically,
rover handlers minimize error by having the rover complete a sequence
of
steps known as a “get fine attitude” based on the changing position of
the sun relative to the rover. The rover then takes images with the
hazard avoidance and navigation cameras, which provide guidance for
positioning the robotic arm and driving as well as documenting the
correction. The entire process takes about one hour, which at present
is
roughly equivalent to a week of winter science operations. Between
these
updates, the rover’s onboard computer keeps track of attitude changes,
but error builds up in this calculation over time.

The new process involves sending a command to Spirit with the position
reported by the rover after the last quick “get fine attitude,” on sol
855 (May 30, 2006). Rover drivers confirmed that the rover had not
moved
since then by checking images from the hazard avoidance cameras.
Following the usual attitude adjustment, the team planned to direct the
rover to take two new images with the navigation camera and compare
those to images from sol 855 as an additional means of verifying the
accuracy of the adjustment.

Sol 882: Spirit completed a “bitty cloud” search designed to look for
changes in the Martian sky, a photon transfer observation to measure
electronic noise (unwanted signals) picked up by CCDs (charge-coupled
devices – imaging sensors that convert light into electrical current)
in the left eye of the rover’s panoramic camera, and observations of
ground targets and atmosphere with the miniature thermal emission
spectrometer.

Sol 884: Spirit completed a photon transfer observation of the right
eye
of the panoramic camera.

Sol 885: Plans called for Spirit to conduct atmospheric studies of the
Martian sky and ground using the panoramic camera and miniature thermal
emission spectrometer. The rover’s schedule also included another
5-hour
study of Halley with the Moessbauer spectrometer.

Sol 887: Plans called for Spirit to acquire a single frame of column 21
of the “McMurdo panorama.”