On the way to “Winter Haven 3,” the spot on the north face of “Home Plate” where NASA’s Spirit rover is headed, the rover has driven into an area below a hummock (elevated area). Spirit has tried unsuccessfully during the past week to climb onto the hummock and make progress toward Winter Haven 3. Because it is critical to reach the north face while enough solar energy is available to get there, Spirit spends every available day driving. In-between drives, Spirit recharges the batteries and conducts very light remote sensing.

The rover’s drive on sol 1378 (Nov. 18, 2007) ended early when Spirit’s unusable, right front wheel got snagged on a buried rock, causing the rover to turn and drive into a “keep-out zone.” Two Martian days later, on sol 1380 (Nov. 20, 2007), the drive faulted out again when the rover experienced more than 90-percent slip after traveling 3.6 meters (11.8 feet). The rover’s handlers continue to work on strategies for enabling Spirit to drive away from the outcrop.

Spirit’s top priority is to reach the north-facing slope of “Home Plate,” where the rover plans to hunker down during the coming cold, winter season of waning sunlight. Spirit is healthy and all subsystems are nominal. Energy is currently around 305 watt-hours (100 watt-hours is the amount of energy needed to light a 100-watt bulb for one hour).

In addition to receiving morning instructions directly from Earth via the high-gain antenna, sending evening data to Earth at UHF frequencies via the Odyssey orbiter, and measuring atmospheric dust levels with the panoramic camera, Spirit completed the following activities:

Sol 1378: Spirit drove toward the hummock known as “Site 7,” took images just before and after ending the drive with the hazard avoidance cameras, and acquired post-drive image mosaics with the navigation and panoramic cameras. The images indicated that the right front wheel had slipped off a buried rock and turned away from the targeted drive region. The rover acquired full-color foreground images, using all 13 filters of the panoramic camera.

Sol 1380: Spirit drove 3.6 meters (11.8 feet), took images before and after the drive with the hazard avoidance cameras, and acquired post-drive image mosaics with the navigation and panoramic cameras. Early the next morning, the rover completed a survey of rock clasts and took images of the rover’s tracks (to look for compositional changes revealed by trenching) and the Martian horizon with the panoramic camera.

Sol 1381: Plans called for Spirit to recharge the batteries.

Sol 1382: Plans called for Spirit to monitor dust on the miniature thermal emission spectrometer, acquire panoramic camera images of a target known as “Sorbet” near the center of Home Plate, and acquire movie frames in search of dust devils using the navigation camera.

Sol 1383 (Nov. 24, 2007): Plans called for Spirit to calibrate the panoramic camera by taking images in darkness, acquire spot images of the sky with the panoramic camera, check for drift (changes over time) in the miniature thermal emission spectrometer, and survey the sky and ground with the miniature thermal emission spectrometer. 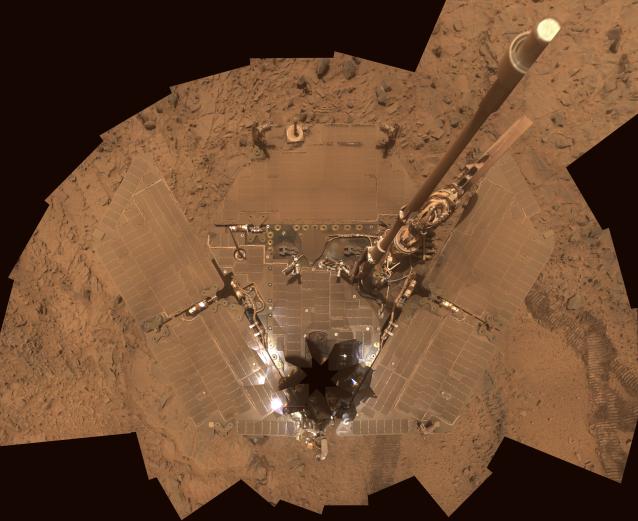