Mars Reconnaissance Orbiter is on the Approach
February 3, 2006

NASA’s next martian orbiter has gotten one step closer to the red
planet
with the transition from cruise phase to approach phase!

“Cruise is a deceptive term - we certainly weren’t playing
shuffleboard,” joked project manager Jim Graf. “It was a very busy time
for the team. Many tests were conducted to ensure that the instruments
onboard were functioning properly and our navigators performed
trajectory correction maneuvers to keep us on a very precise path to
Mars.”

Speaking of that precision, the third of four possible course
corrections was deemed unnecessary this week.

“The navigation solutions have shown a great consistency since the
second trajectory correction maneuver was executed on November 18,”
said
Han You, navigation team chief. “More importantly, the current data
indicate that the spacecraft aim for insertion into Mars’ orbit is well
within the projected target. If the current trend continues, the
spacecraft will require only a very small nudge to fine tune the final
aim.”

The next trajectory correction maneuver opportunity is scheduled for
February 28, 2006. The orbiter will arrive at the planet on March 10,
2006. 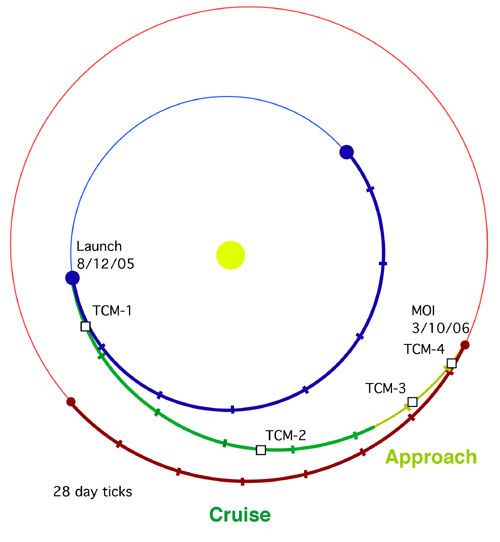