Note: NASA’s Kennedy Space Center issues Space Shuttle Processing
Status Reports each week, and is the source for information regarding
processing activities associated with the vehicles and payloads. This
report does not necessarily reflect the chronological order of future
Space Shuttle missions. If you are a member of the media and would
like further information, visit
http://www.nasa.gov/centers/kennedy/news/index.html.

Technicians worked on inspections and closeouts prior to next week’s
installation of the forward reaction control system. Installation of
the dome-mounted heat shields that surround the shuttle’s three
engines will begin when main engine leak checks are complete.

Removal and replacement of gap fillers is complete in the priority one
areas (forward and midbody sections of the vehicle). Work will begin
next week on the gap fillers in other areas on the orbiter’s belly.
Technicians are using new installation procedures to ensure the gap
fillers stay in place during the shuttle’s re-entry to the
atmosphere.

Solid rocket booster stacking for STS-121 is under way. Both the left
and right aft boosters were delivered to the Vehicle Assembly
Building this week and placed on the Mobile Launch Platform in High
Bay 3. The aft segments were bolted to the platform, and work has
begun to stack the left and right aft center segments.

Power down operations continue. Cold plate removal and replacement in
the shuttle’s aft were completed this week. Cold plates keep
electronics boxes cool. The mechanical release latches for the
shuttle arm (remote manipulator system) are installed, and pre-load
tests are under way.

Removal and replacement of Atlantis’ gap fillers began this week in
the priority one area. One of two reaction jet drivers located in the
shuttle’s aft was installed. These drivers power the reaction control
thrusters of the orbiter maneuvering system pods while in orbit.
Technicians removed mid-power control assembly #2 and #3 for
inspection. These units are part of the system that controls power
distribution in the orbiter.

In Orbiter Processing Facility Bay 2, processing continues on
Endeavour following a nearly two-year modification period. This week,
technicians leveled the shuttle in preparation for the Heads Up
Display (HUD) alignment. The HUD is the device used to optically
align the orbiter for landing.

Preparations for power up are in work. All wiring tests and connector
mates are complete. Technicians are finishing the installation of
body flap hardware.

Work continues on the manipulator positioning mechanism for the
shuttle’s robotic arm before installation in the vehicle. The
mechanisms are pedestals that keep the arm secured in the payload bay
when it’s not in use.

NASA has adjusted its contract with Lockheed Martin Space Systems to
produce 18 instead of 35 shuttle external fuel tanks. This reduction
aligns the contract with the Space Shuttle Program’s planned missions
through 2010.

For information about NASA and agency programs on the Web, visit: 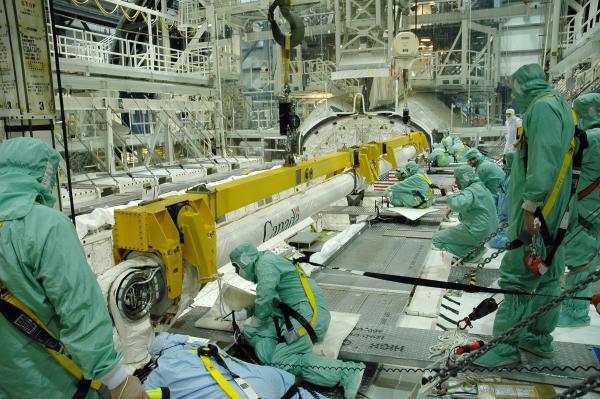