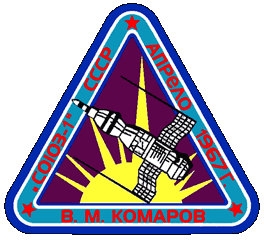 Soyuz 1 was the first crewed flight of a Soyuz spacecraft, it carried the Soviet cosmonaut Vladimir Komarov to orbit. The mission goal was to rendezvous with Soyuz 2 and move crew members between the spacecrafts, the goal was not met due to Soyuz 2 launch being called off due to thunderstorms. Vladimir Komarov was killed when the parachutes of his Soyuz capsule failed during descent to earth becoming the first in-flight fatality of spaceflight.