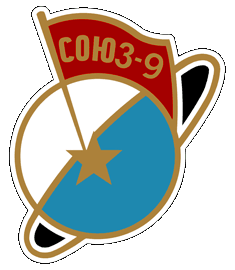 Soyuz 9 carried cosmonauts Andrian Nikolayev & Vitali Sevastyanov to orbit. The mission lasted 17 days, 16 hours & 58 minutes completing 288 orbits around Earth. They broke the endurance record held by Gemini 7 for 5 years. This was the first crewed space launch that lifted off at night. As of 2016 it still holds the record for longest crewed flight by a solo spacecraft. The goal of the mission was to conduct various pysiological and biomedical experiments on themselves and invastigate possible social implications of extended duration spaceflight.