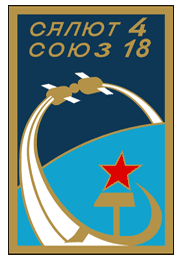 Soyuz 18 was the second and final crew to man the Salyut 4 space station. The mission began on May 24th 1975 at 1458:10 UTC, launching Commander Pyotr Klimuk & Flight Engineer Vitali Sevastyanov into orbit docking with Salyut 4 2 days later. They stayed on the station for 63 days setting a new Soviet space endurance record at the time. Klimuk & Sevastyanov were the back-up crew for the failed Soyuz 18a mission so their mission goals included completing the goals of Soyuz 18a, continuing the work of Soyuz 17 & fixing or replacing equipment. They replaced a gas analyzer, switched a pumping condenser in the water regeneration system with a hand pump & fixed a spectrometer. Mostly the experiments were biological & medical but they also studied stars, planets, earth and its atmosphere with roughly 2000 photographs of Earth and 600 of the sun taken. The mission concluded with a safe landing on June 26th 1975 at 1418:18 UTC.