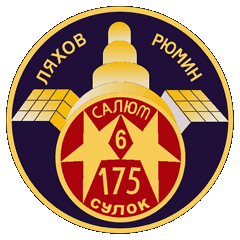 Soyuz 32 was the seventh mission to visit the Salyut 6 space station and carried the EO-3 expedition, which was the third long-duration crew for the station. The mission began on February 25, 1979, 11:53:49 UTC, launching Commander Vladimir Lyakhov and Flight Engineer Valery Ryumin into orbit. They docked with the station the next day. During their 175-day stay on the station, EO-3 crew conducted various scientific experiments, performed an EVA and were visited by three uncrewed Progress cargo spacecrafts and an uncrewed Soyuz 34. Soyuz 32 crew returned to Earth in Soyuz 34 spacecraft, while their own spacecraft returned uncrewed several days later.
The mission concluded with a safe landing back on Earth on August 19, 1979, 12:29:26 UTC.