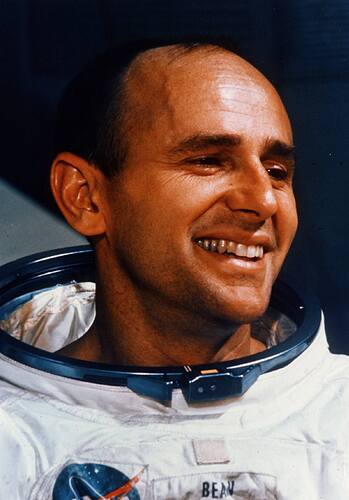 (Traduzione automatica) Alan LaVern Bean was an American naval officer and naval aviator, aeronautical engineer, test pilot, and NASA astronaut; he was the fourth person to walk on the Moon. He was selected to become an astronaut by NASA in 1963 as part of Astronaut Group 3.

He made his first flight into space aboard Apollo 12, the second manned mission to land on the Moon, at age 37 in November 1969. He made his second and final flight into space on the Skylab 3 mission in 1973, the second manned mission to the Skylab space station. After retiring from the United States Navy in 1975 and NASA in 1981, he pursued his interest in painting, depicting various space-related scenes and documenting his own experiences in space as well as that of his fellow Apollo program astronauts. He was the last living crew member of Apollo 12.