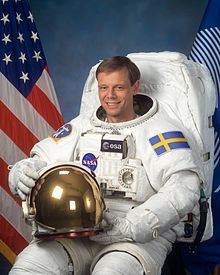 (Traduzione automatica) Arne Christer Fuglesang (born March 18, 1957 in Stockholm) is a Swedish physicist and an ESA astronaut. He was first launched aboard the STS-116 Space Shuttle mission on December 10, 2006, at 01:47 GMT, making him the first Swedish citizen in space.

Married with three children, he was a Fellow at CERN and taught mathematics at the Royal Institute of Technology before being selected to join the European Astronaut Corps in 1992. He has participated in two Space Shuttle missions and five spacewalks, and is the first person outside of the United States or Russian space programs to participate in more than three spacewalks.