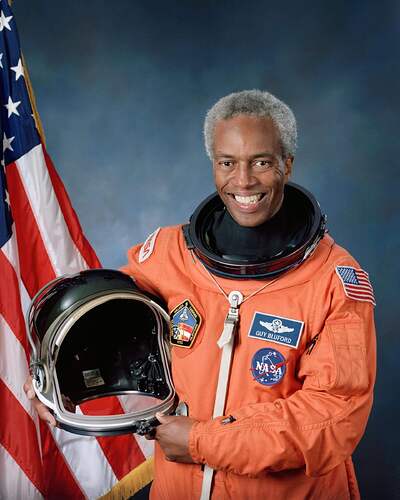 (Traduzione automatica) Guion Stewart Bluford Jr., Ph.D. is an American aerospace engineer, retired U.S. Air Force officer and fighter pilot, and former NASA astronaut, who was the first African American in space.[1] Before becoming an astronaut, he was an officer in the U.S. Air Force, where he remained while assigned to NASA, rising to the rank of Colonel. He participated in four Space Shuttle flights between 1983 and 1992. In 1983, as a member of the crew of the Orbiter Challenger on the mission STS-8, he became the first African American in space as well as the second person of African ancestry in space, after Cuban cosmonaut Arnaldo Tamayo Méndez.