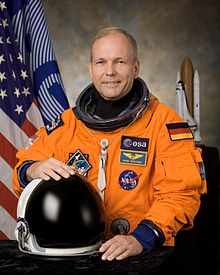 (Traduzione automatica) Hans Wilhelm Schlegel (Überlingen, 3 August 1951) is a German physicist, an ESA astronaut, and a veteran of two NASA Space Shuttle missions.
From 1995 to 1997, he trained as the backup crew member for the German-Russian Mir’97 mission, and afterwards received additional training in Russia to become qualified as a second board engineer for the Mir space station. In 1998, he became a member of the European Astronaut Corps.

Schlegel was a Mission Specialist on the STS-122 Space Shuttle mission. The mission was charged with the responsibility of putting the Columbus laboratory in orbit, in addition to its connection to the International Space Station.