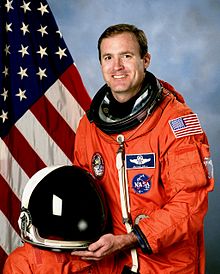 (Traduzione automatica) James Halsell was an Air Force Test Pilot when he was selected by NASA to become an Astronaut in 1990. He was a veteran of five flights totalling over 1,250 hours in space, pilot of two STS missions and commander of three. He also served as a manager for Shuttle Launch Integration and Space Shuttle Program manager. After the Columbia accident he led the NASA Return to Flight Planning team.