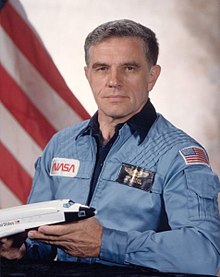 (Traduzione automatica) Karl Gordon Henize, Ph.D. was an American astronomer, space scientist, NASA astronaut, and professor at Northwestern University. Henize was selected as a scientist-astronaut by NASA in August 1967. Henize was a mission specialist on the Spacelab-2 mission (STS-51-F) which launched from Kennedy Space Center, Florida, on July 29, 1985.

He died in 1993, during a Mount Everest expedition. The purpose of this expedition was to test for NASA a meter called a Tissue Equivalent Proportional Counter (TEPC): testing at different altitudes (17,000 ft, 19,000 ft and 21,000 ft) would reveal how people’s bodies would be affected, including the way bodily tissues behaved, when struck by radiation, and this was important for the planning of long duration space missions.