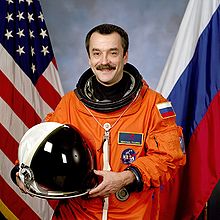 (Traduzione automatica) Mikhail Vladislavovich Tyurin (Russian: Михаил Владиславович Тюрин) (born March 2, 1960) is a former Russian cosmonaut who flew several missions to the International Space Station and completed four spacewalks during his career. He is called a hero of the Russian Federation for his work as a cosmonaut.

In 1994 he was selected to begin cosmonaut training, and in 1998 he started training as a flight engineer for the Expedition 3 crew. He also served as a backup crew member for the first ISS mission.