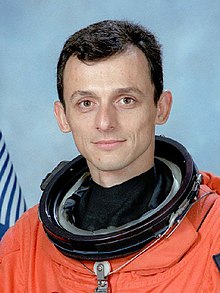 (Traduzione automatica) Pedro Francisco Duque Duque, OF, OMSE (Madrid, 14 March 1963) is a Spanish astronaut and aeronautics engineer, currently serving as Spain’s Minister of Science, Innovation and Universities. He was the first Spanish astronaut.

Duque underwent training in both Russia and the United States. His first spaceflight was as a mission specialist aboard space shuttle mission STS-95, during which Duque supervised ESA experimental modules. In October 2003, Duque visited the International Space Station on board of a Sojuz TMA Ship for several days during a crew changeover. The scientific program of this visit was called by ESA/Spain Misión Cervantes.