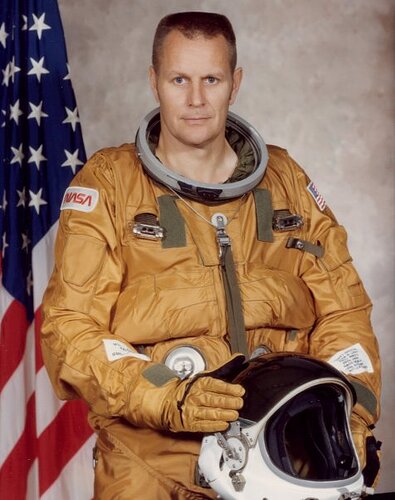 (Traduzione automatica) Robert Franklyn “Bob” Overmyer was an American test pilot, naval aviator, aeronautical engineer, physicist, United States Marine Corps officer, and USAF/NASA astronaut. He was born in Lorain, Ohio, but considered Westlake, Ohio his hometown. Overmyer was selected by the United States Air Force as an astronaut for its Manned Orbiting Laboratory in 1966. Upon cancellation of this program in 1969, he became a NASA astronaut and served support crew duties for the Skylab program and Apollo-Sojuz Test Project. In 1976, he was assigned to the Space Shuttle program, and flew as pilot on STS-5 in 1982, and as commander on STS-51-B in 1985. He was selected as a lead investigator into the Space Shuttle Challenger disaster, and retired from NASA in 1986. Ten years later, Overmyer died in Duluth, Minnesota while testing the Cirrus VK-30 composite homebuilt aircraft.