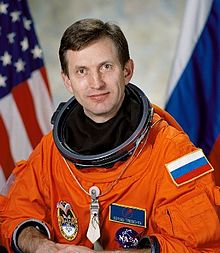 (Traduzione automatica) Sergei Yevgenyevich Treshchov (Сергей Евгеньевич Трещёв, born 18 August 1958) is a former cosmonaut of the RSC Energia. He spent 184 days in space as a flight engineer of the International Space Station long duration Expedition 5 crew. During the mission Treshchov also conducted a spacewalk.
In 1992, he enrolled in the RSC Energia cosmonaut detachment, and from 1992 to 1994 he completed the basic Cosmonaut training course. Treshchov spent the next 3 years (1994 to 1996) in advanced Test Cosmonaut training.
From June 1997 to February 1998, Treshchov trained as a flight engineer for the Mir station backup Exp-25 crew. From June 1999 to July 2000 he trained as a flight engineer for the Sojuz-TM backup ISS contingency crew. Initially, he trained as backup to the ISS Expedition 3 crew.