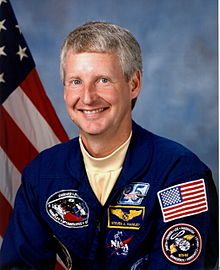 (Traduzione automatica) Steven Alan Hawley is a former NASA astronaut who flew on five U.S. Space Shuttle flights. He is professor of physics and astronomy and director of engineering physics at the University of Kansas.

Following an aborted attempt to launch STS-41-D where two main engines were stopped shortly after they started because the third failed to start, Hawley is reported to have broken the tense atmosphere in the shuttle cabin, saying, “I thought we’d be a lot higher at MECO!”