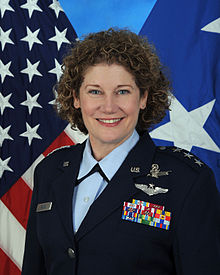 (Traduzione automatica) Susan Jane Helms is a retired lieutenant general in the United States Air Force and a former NASA astronaut. Helms was a crew member on five Space Shuttle missions and was a resident of the International Space Station (ISS) for over five months in 2001. While participating in ISS Expedition 2, she and Jim Voss conducted an 8-hour and 56 minute spacewalk, the world record.