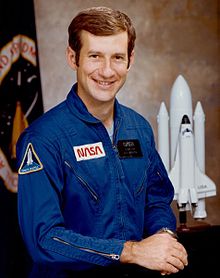 (Traduzione automatica) Terry Jonathan “T.J.” Hart is an American mechanical and electrical engineer, a retired United States Air Force lieutenant colonel and pilot, and former NASA astronaut. Hart was selected as an astronaut candidate by NASA in January 1978. He flew as a mission specialist on STS-41-C and logged a total of 168 hours in space.