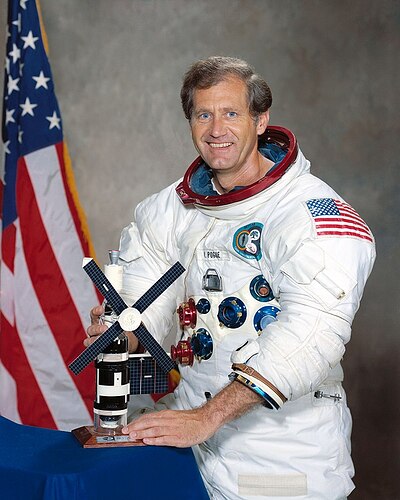 Born and educated in Oklahoma, Pogue graduated from college and enlisted in the United States Air Force, in which he served for 24 years. He flew combat during the Korean War, and with the elite USAF Thunderbirds. He served as a flight instructor and mathematics professor, and was a versatile test pilot, including two years in an exchange with the RAF (UK).

Colonel Pogue was an Air Force instructor when accepted into NASA in 1966. His astronaut career included one orbital mission, as pilot of the last crew of Skylab. The crew set a duration record (84 days) that was unbroken in NASA for over 20 years, and in orbit they conducted dozens of research experiments. The mission was also noted for a dispute with ground control over schedule management that news media named “The Skylab Mutiny”.

Pogue retired from both the USAF and NASA a few months after he returned from Skylab. Over the next 30 plus years he taught, lectured, consulted, and wrote about aviation and aeronatics, in the US and abroad. He died in 2014, age 84, survived by three children, four stepsons, and his third wife.