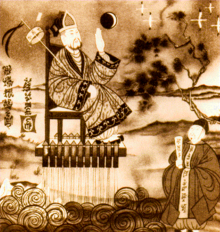 Wan Hu (万户 or 万虎) is a legendary Chinese official – supposedly having lived from as early as 2000 BCE to as late as the middle Ming dynasty (16th century) — who was described in 20th century sources as the world's first "astronaut" by having been lifted by rockets into outer space. The crater Wan-Hoo on the far side of the Moon is named after him.[citation needed] A precursor of the story of Wan Hu appeared in an article by John Elfreth Watkins, published in the 2 October 1909 issue of Scienti...

The legend of Wan Hu was not recorded in any Chinese history book. The earliest known mention of it is an unreferenced description in Rockets and Jets by American author Herbert S. Zim in 1945[2].

The legend was then introduced into China via translation, and that is why the exact Chinese name that this legendary person had (è¬è™Ž or è¬æˆ¶) as mentioned above could not be determined just based on the pronunciation.

The story is more of an urban legend invented in the 20th century rather than part of Chinese historical records.