A new station will join ESA’s tracking network on 17 January 2008. Located on the Portuguese island of Santa Maria in the Azores, the station will track launches from Europe’s spaceport in Kourou, French Guiana, as they pass overhead at 28 000 km per hour.

The Santa Maria station will be one of the first ESTRACK stations with launcher tracking capability. The station can be used to track mid-inclination Ariane launch trajectories and will also be capable of tracking Vega and Soyuz, soon to be operated from ESA’s Spaceport at Kourou, French Guiana, as well as ongoing Earth observation missions, including ESA’s ERS-2 and Envisat, and Canada’s Radarsat, among others.

“Adding Santa Maria provides a critical capability for tracking ATV launches on Ariane as well as other launches from Kourou, and also opens up new possibilities for services based on the receipt of Earth observation data,” said Gerhard Billig, the SMA service manager at ESA’s Operations directorate.

ESA’s ESTRACK network will grow from eight to nine stations with the formal inauguration of Santa Maria on 17 January.

It is located at about 200 metres elevation on the top of the island’s Monte das Flores (Hill of Flowers); Santa Maria is the southernmost island in the Azores, which lie in the Atlantic some 1500 km from Lisbon.

For Ariane 5 tracking, the station will receive signals in S-band, at 2200-2300 MHz; X-band capability will be added in the near future to receive scientific data from Earth observation satellites.

Tracking Ariane
The first launch to be tracked from Santa Maria will take place in early 2008, when Jules Verne, the first Automated Transfer Vehicle (ATV) to be sent to the International Space Station, lifts off from Europe’s Spaceport in French Guiana on board an Ariane 5 launcher. 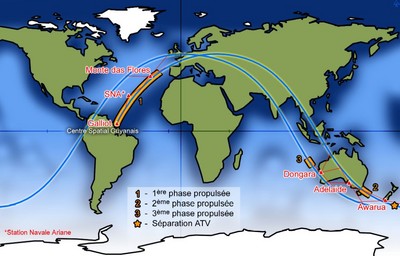 This particular trajectory made it necessary to set up a specific network of ground tracking stations so as to enable the receipt of real-time data during all phases and critical flight events. SMA is one of the first ESA stations that can track a launcher during the propulsion phases.

The overall Ariane ground station network is managed by the CNES operational team of the Guiana Space Centre.

SMA will acquire signals from Ariane during its first orbit until cut-off of the upper-stage propulsion system, and then in the second orbit during the ballistic phase after ATV separation and before the de-orbiting boost. Ariane will pass over SMA at some 28 000 kph.

Santa Maria planned tracking operations
In the near future, SMA will also be used to receive launcher telemetry for the planned Galileo global positioning satellite launches via Ariane or Soyuz.

About Santa Maria station
The Santa Maria station has been developed under the Ariane Development Programme (ACEP) with technical management from ESA’s Operations directorate. It represents the first such cooperation between the Agency’s Launchers and Operations teams, which will continue for the update of the ESTRACK station at Perth, Australia, to enable a similar launcher tracking capability.

The station has been established on the Monte das Flores site in Santa Maria within the frame of an agreement between ESA and the Portuguese authorities and is operated locally under contract by a consortium comprising industrial partners EDISOFT/SEGMA/GlobalEDA of Portugal/Azores.

A new station will join ESA's tracking network on 17 January 2008. Located on the Portuguese island of Santa Maria in the Azores, the station will track launches from Europe's spaceport in Kourou, French Guiana, as they pass overhead at 28 000 km per...