I hope these photos help with your project, and at least provide a little more information on the Tremulis TVT.

First, here’s a clearer photo of the TVT rendering: 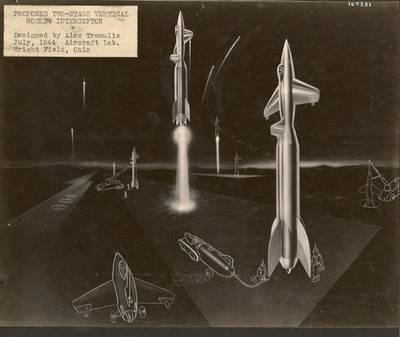 … and a closeup of the interceptor with "jeterons”:

Tremulis’ rendering became a part of a bigger campaign when it was featured in several U.S. Army publications: 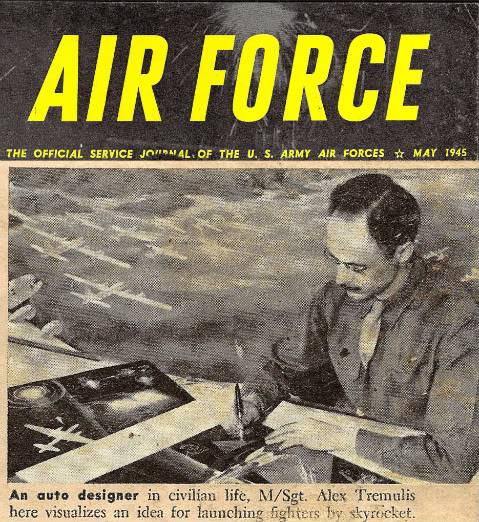 After the nuclear bombs dropped on Japan, the rendering and models were used in another campaign. This time it had transformed into a “radar-controlled atomic bomb”. This may have helped to escalate the nuclear arms race:

Tremulis’ “Lady in Red” (December 1943) was to be another interceptor that I think was part of a contest in the design of a supersonic jet, which the Bell X1 eventually won: 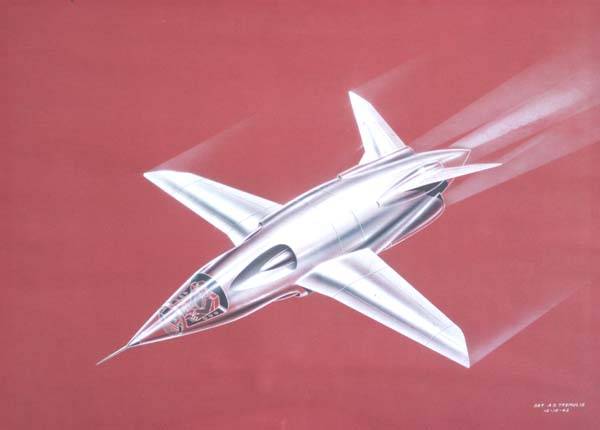 On a side note, this rendering also shows up on the wall of the Tucker design studio in 1949. That’s Jim Gaylord (1955 Gaylord Gladiator automobile) discussing the Tucker with Tremulis: 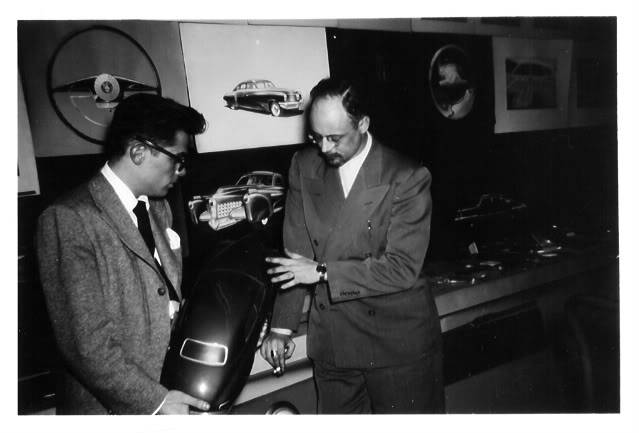 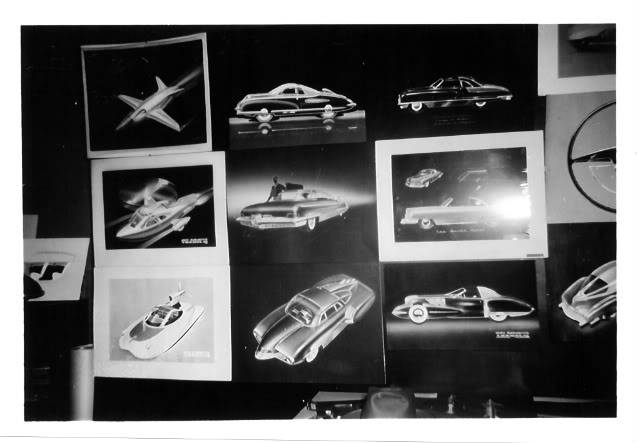 In any case, Tremulis gets a lot of credit from Don Ritchie as having created one of the first concepts that was to eventually turn into the Dyna-Soar project, the forebearer of today’s Space Shuttle.

Anyway, I hope this translates well from English. If not, please don’t blame me, it’s Google’s fault…

The flying saucer hood ornament has such a rich history behind it. It all started in Roswell, New Mexico on July 7, 1947 (just after the unveiling of the “Tin Goose”). The headlines made it clear that a flying disc had been recovered: 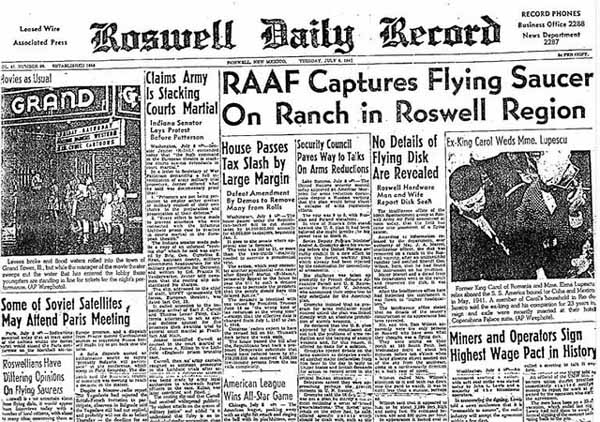 News of the incident did not go unnoticed by Tremulis. Shortly afterwards, he illustrated what is perhaps the first visual incarnation of what a flying saucer could look like in all its glory, streaking towards earth from outer space: 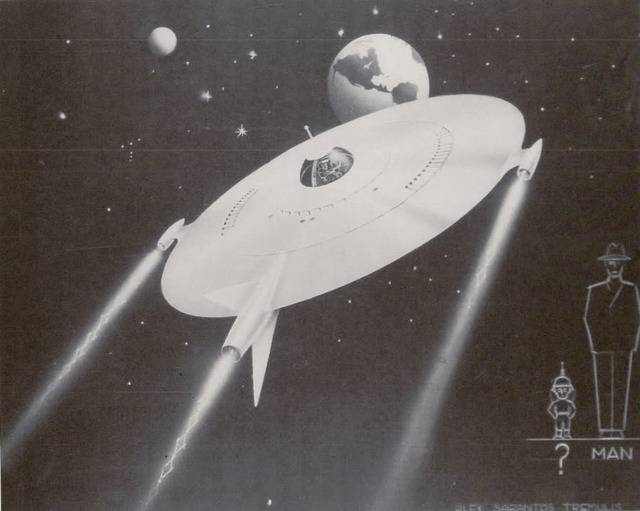 The rendering made it into the Chicago Tribune and it was this version that captured the imaginations of the nation and provided UFO fodder for years to come. Not satisfied with just the spacecraft, Tremulis also illustrated what the aliens may have looked like in this rendering of an alien being interrogated and the alien’s words being translated into human language through a tickertape-type computer: 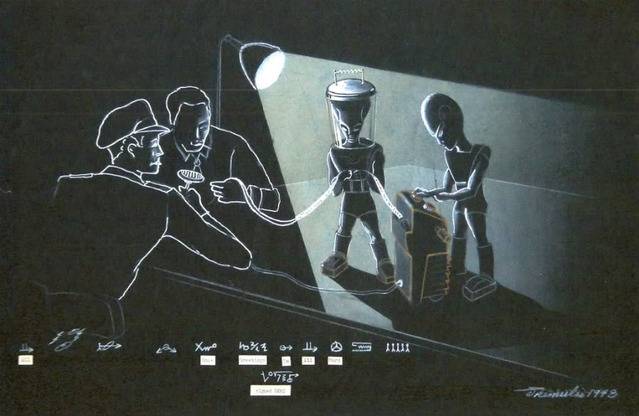 This was at a time when preparing the Tucker for production was in full swing. There was not a lot of time to devote to UFO ramblings since there was plenty of Tucker work to be done. Then on March 9, 1950, it happened again: 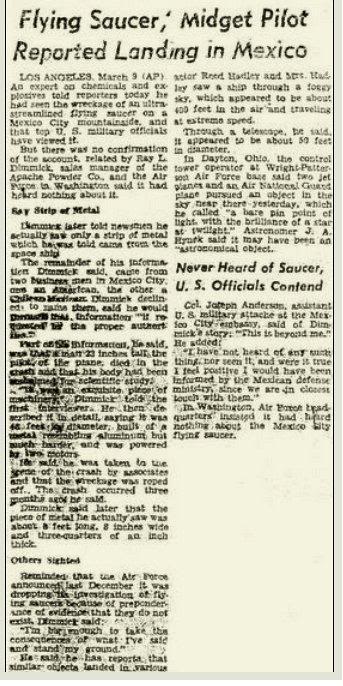 This time more publications picked up on the story and the Tremulis renderings reached an even wider audience. 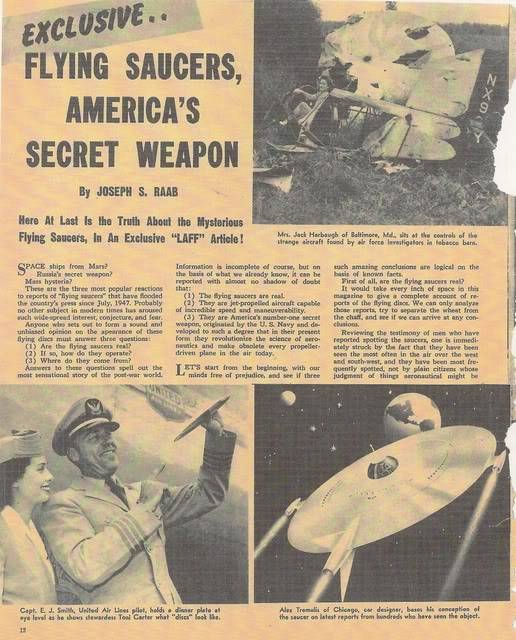 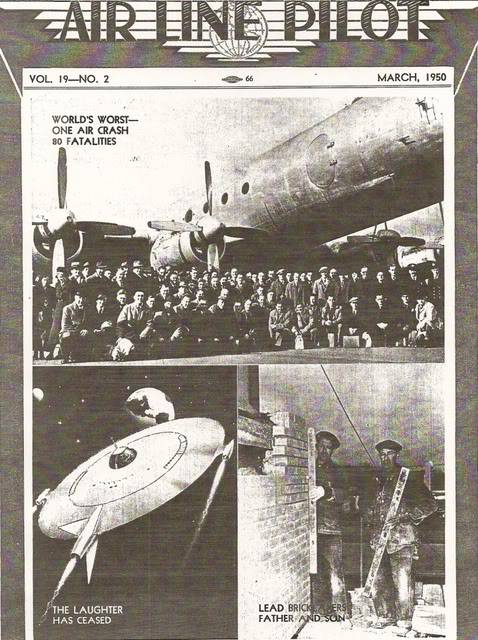 As a follow-up to his previous renderings, Tremulis put his thoughts to paper on the possibilities of space travel and did it with his usual mix of factoids, anecdotes, aerodynamic philosophies, and his out-of-this-world sense of humor: 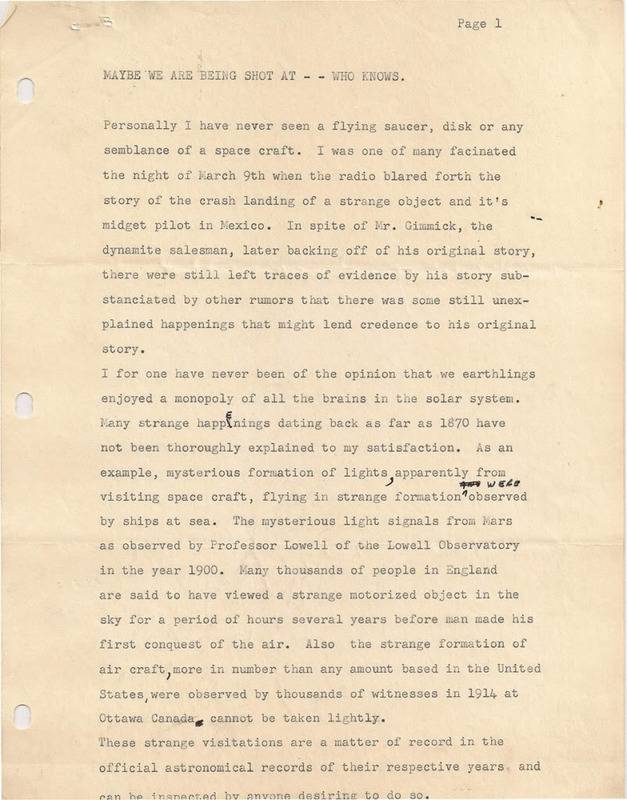 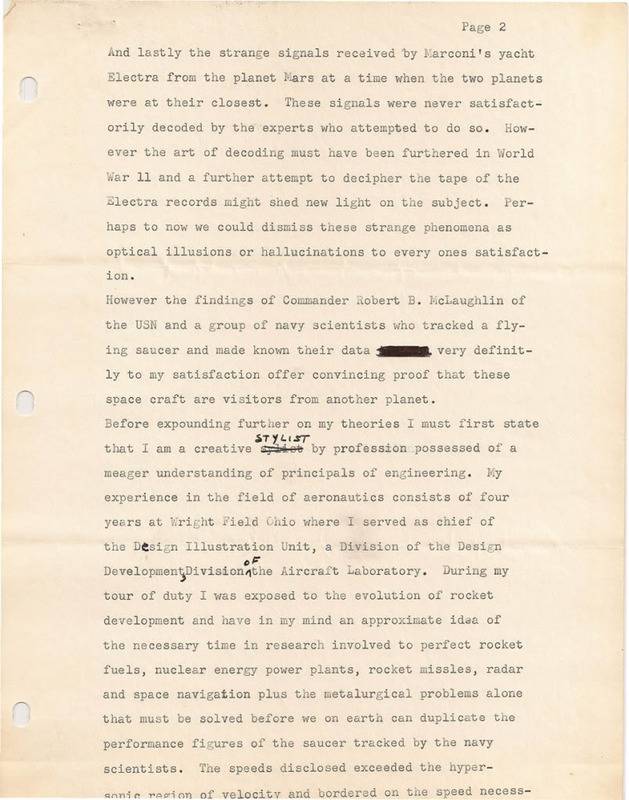 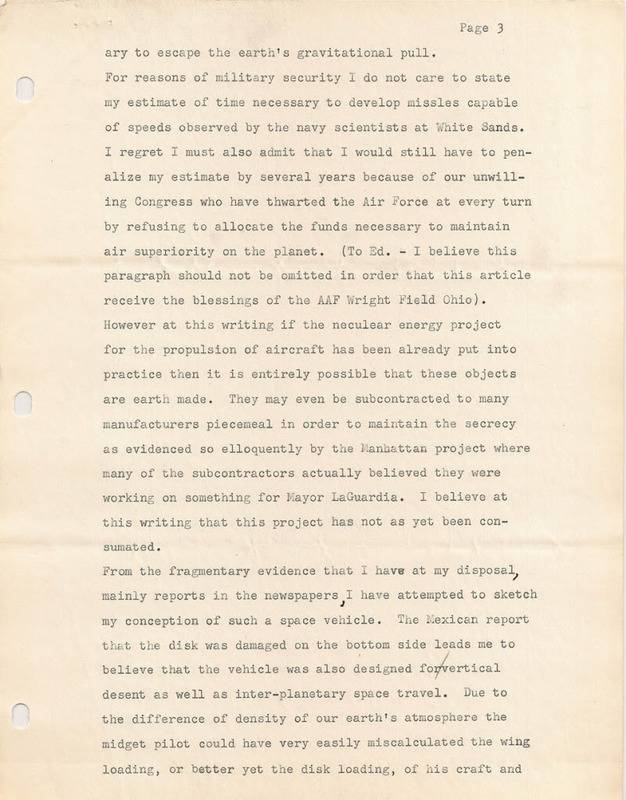 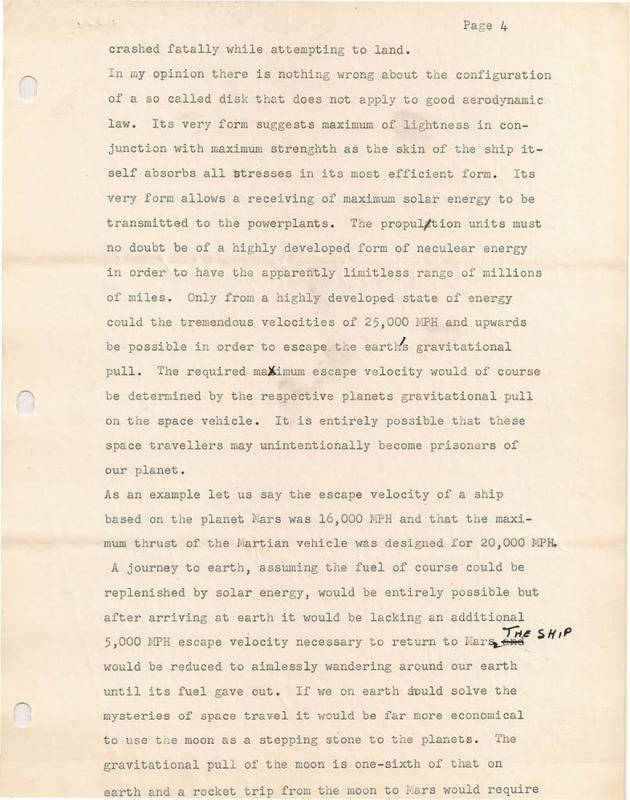 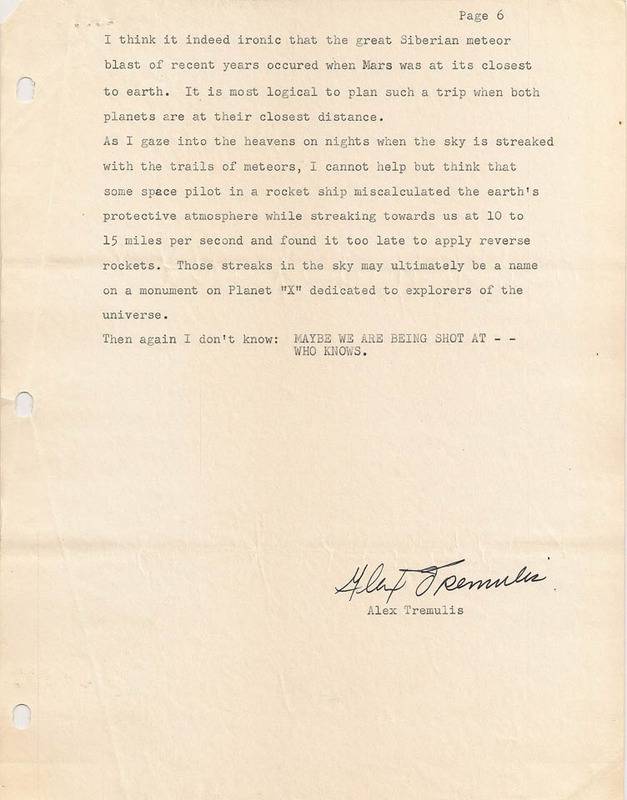 With the UFO craze, and the nation captivated by the possibilities that other life forms may exist outside of the confines of Earth, Tremulis and Peter Pagratis teamed up to produce these hood ornaments. They filed for a design patent on January 27, 1951, and it issued on September 4, 1951, as U.S. Design Patent D164,461 (a strange coincidence that the patent number is a palindrome???). Note that Tremulis was now a resident of Ypsilanti, birthplace of the Tucker automobile, as a result of his then-current employment at Kaiser-Frazer: 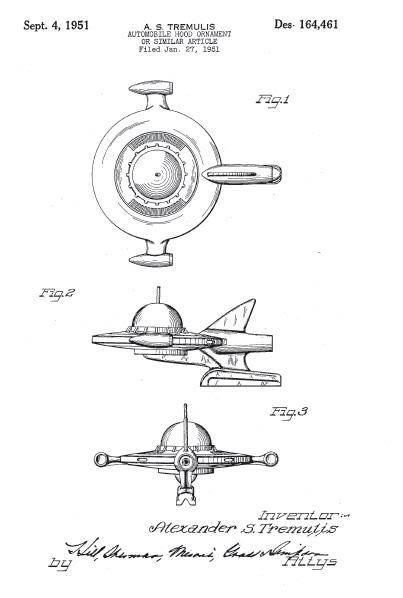 Look closely at the fine details of the patent illustration and you’ll see that it mirrors Tremulis’ earlier flying saucer rendering.

As far as the hood ornament goes, contracts were written to start production with certain minimums to be met. From what I could gather, these were to be sold aftermarket for about $5.00 each.

Unfortunately, the partnership ended without selling too many of the ornaments. 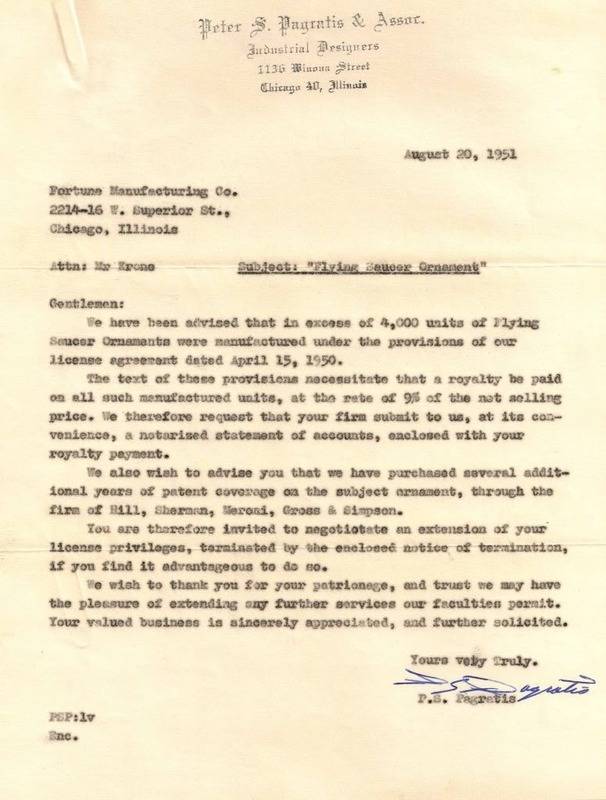 The contract was therefore cancelled with Fortune Manufacturing. However, the relationship between Tremulis and Pagratis was not over. Following the termination of the agreement with Fortune, Tremulis went on to design and patent a set of earmuffs in December, 1954 that would have made a nice accessory to wear while driving around with the hood ornament: 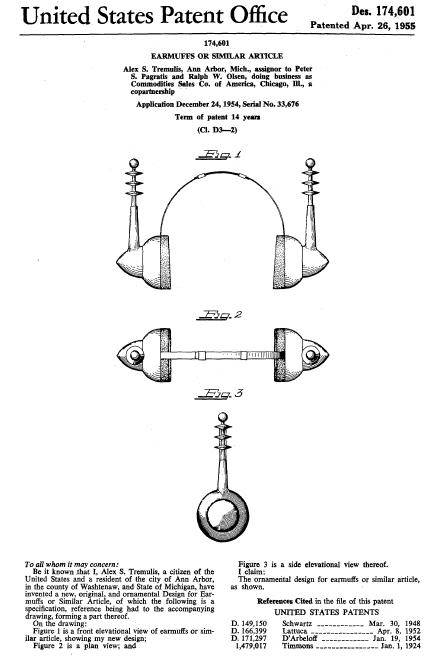 I’m not sure whether or not a new agreement was made with another manufacturing company to pursue both designs, but presumably it would have been feasible that more ornaments were manufactured along with the earmuffs. I’ll keep searching…