Pasadena, Calif. – A NASA spacecraft in orbit around Mars has taken
the first ever image of active avalanches near the Red Planet’s north
pole. The image shows tan clouds billowing away from the foot of a
towering slope, where ice and dust have just cascaded down.

The High Resolution Imaging Experiment (HiRISE) on NASA’s Mars
Reconnaissance Orbiter took the photograph Feb. 19. It is one of
approximately 2,400 HiRISE images being released today.

Ingrid Daubar Spitale of the University of Arizona, Tucson, who works
on targeting the camera and has studied hundreds of HiRISE images,
was the first person to notice the avalanches. “It really surprised
me,” she said. “It’s great to see something so dynamic on Mars. A lot
of what we see there hasn’t changed for millions of years.”

The camera is looking repeatedly at selected places on Mars to track
seasonal changes. However, the main target of the Feb. 19 image was
not the steep slope.

“We were checking for springtime changes in the carbon-dioxide frost
covering a dune field, and finding the avalanches was completely
serendipitous,” said Candice Hansen, deputy principal investigator
for HiRISE, at NASA’s Jet Propulsion Laboratory, Pasadena, Calif.

The full image reveals features as small as a desk in a strip of
terrain 3.7 miles wide and more than 10 times that long, at 84
degrees north latitude. Reddish layers known to be rich in water ice
make up the face of a steep slope more than 2,300 feet tall, running
the length of the image.

“We don’t know what set off these landslides,” said Patrick Russell
of
the University of Berne, Switzerland, a HiRISE team collaborator. “We
plan to take more images of the site through the changing Martian
seasons to see if this kind of avalanche happens all year or is
restricted to early spring.”

More ice than dust probably makes up the material that fell from the
upper portion of the scarp. Imaging of the site during coming months
will track any changes in the new deposit at the base of the slope.
That will help researchers estimate what proportion is ice.

“If blocks of ice broke loose and fell, we expect the water in them
will be changing from solid to gas,” Russell said. “We’ll be watching
to see if blocks and other debris shrink in size. What we learn could
give us a better understanding of one part of the water cycle on
Mars.”

Another notable HiRISE image released today shows a blue crescent
Earth and its moon, as seen by the Mars Reconnaissance Orbiter. The
west coast of South America is visible in the photo. Still other
images allow viewers to explore a wide variety of Martian terrains,
such as dramatic canyons and rhythmic patterns of sand dunes.

The camera is one of six science instruments on the orbiter. The
spacecraft reached Mars in March 2006 and has returned more data than
all other current and past missions to Mars combined.

“Our Mars program is the envy of the world,” said Alan Stern,
associate administrator of NASA’s Science Mission Directorate,
Washington. “We plan to launch a total of five more missions in the
next decade, beginning with the Mars Science Lab rover next year and
a Mars Aeronomy Scout mission in 2011.”

The avalanche image and other selected images, as well as additional
information about the Mars Reconnaissance Orbiter are online at:

The mission is managed by JPL for NASA’s Science Mission Directorate,
Washington. Lockheed Martin Space Systems, Denver, is the prime
contractor for the project and built the spacecraft. The University
of Arizona operates the High Resolution Imaging Science Experiment
camera, which was built by Ball Aerospace and Technology Corp.,
Boulder, Colo. 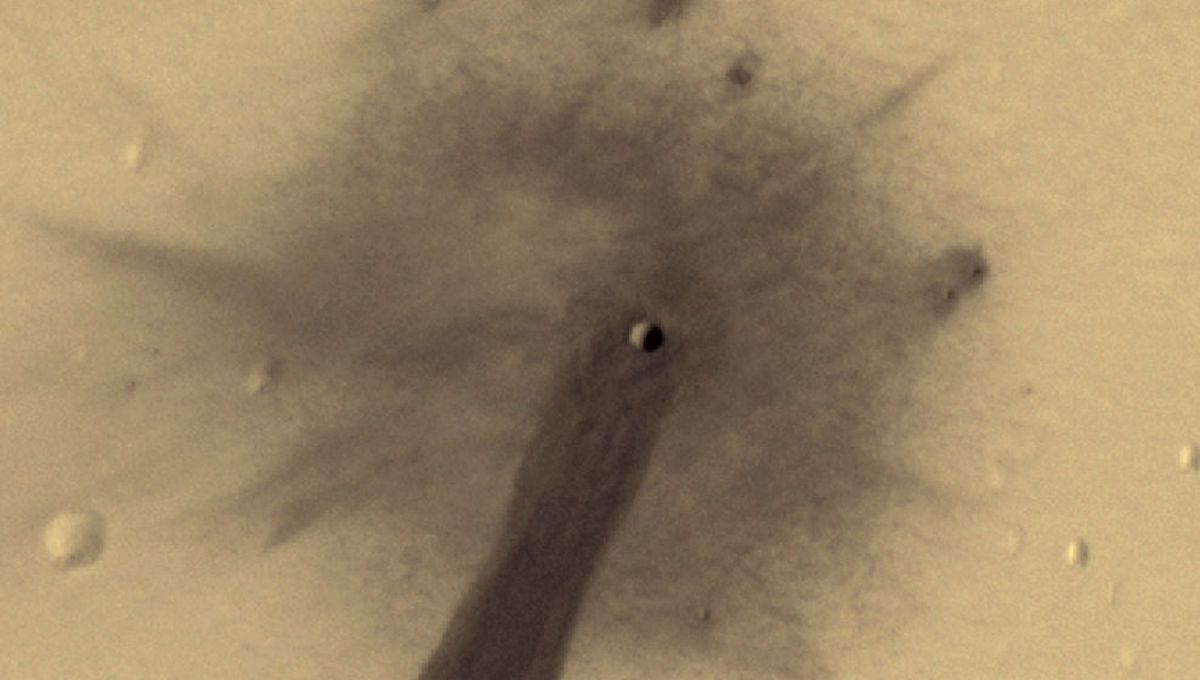 An asteroid impact triggered an avalanche on Mars!

Every now and again I get to write a sentence that truly, deeply, makes me giddy. To wit: Sometime within the past ten years or so, a tiny asteroid impacted Mars and triggered a dust avalanche that left a dark streak a kilometer long on the surface...