Gazing across the ringplane, the Cassini spacecraft spots a Saturn-lit Mimas and the tiny Trojan moon Helene. Only the bright crescent on Mimas’ eastern limb is lit by the Sun; the moon’s night side is illuminated by Saturnshine, or “greylight” as it is called by imaging scientists.

The Cassini-Huygens mission is a cooperative project of NASA, the European Space Agency and the Italian Space Agency. The Jet Propulsion Laboratory, a division of the California Institute of Technology in Pasadena, manages the mission for NASA’s Science Mission Directorate, Washington, D.C. The Cassini orbiter and its two onboard cameras were designed, developed and assembled at JPL. The imaging operations center is based at the Space Science Institute in Boulder, Colo. 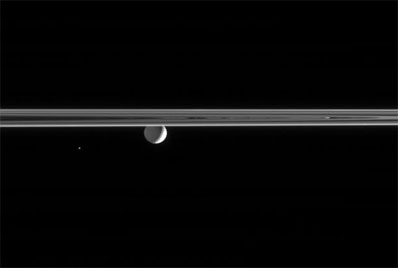