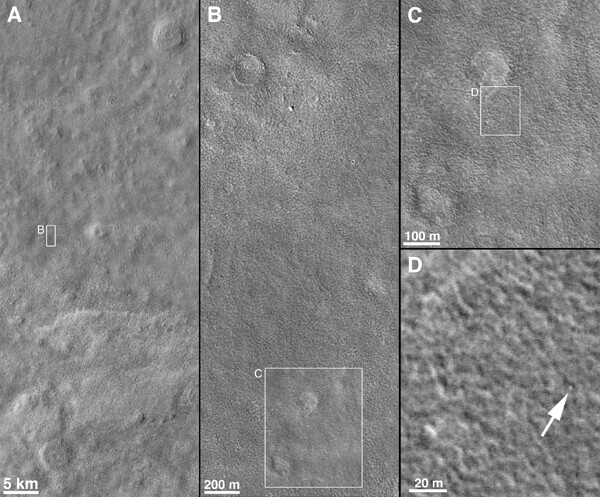 Viking 2 landed 30 years ago today, on 3 September 1976. It was the second of the two Viking landings on Mars. Viking 1 touched down on 20 July 1976. Since the Viking missions of the 1970s, only 3 additional spacecraft have successfully landed and conducted their scientific investigations: Mars Pathfinder (1997), Mars Exploration Rover Spirit (2004-present), and Mars Exploration Rover Opportunity (2004-present). Two new U.S. Mars landed missions are currently in the works: Phoenix, launching in August 2007, and MSL (Mars Science Laboratory), launching in 2009.

On that day 30 years ago, Viking 2 landed in Utopia Planitia, west of Mie Crater, near 48.0°N, 225.7°W. At the time, it was considered that this might be a good place to look for evidence of life in the martian regolith. This middle north latitude site is often obscured by clouds in the winter and dust hazes in the spring. The surface was observed by the lander to be dusted by thin coatings of frost during the winter months.

The first figure (above) shows (A) a mosaic of Viking Orbiter images obtained in the 1970s at a resolution of 75 m/pixel, (B) a typical MGS MOC narrow angle camera view at about 3 meters/pixel (25x higher resolution than the Viking images), and (C, D) sections of a MOC image obtained at ~0.5 m/pixel. The second figure (above) shows an extreme enlargement of the feature identified as Viking Lander 2, compared to a schematic drawing of the lander in the orientation determined during the Viking mission.