At 5:20 am EDT on Mar. 29, 2011, MESSENGER captured this historic image of Mercury. This image is the first ever obtained from a spacecraft in orbit about the Solar System’s innermost planet. Over the subsequent six hours, MESSENGER acquired an additional 363 images before downlinking some of the data to Earth. The MESSENGER team is currently looking over the newly returned data, which are still continuing to come down. 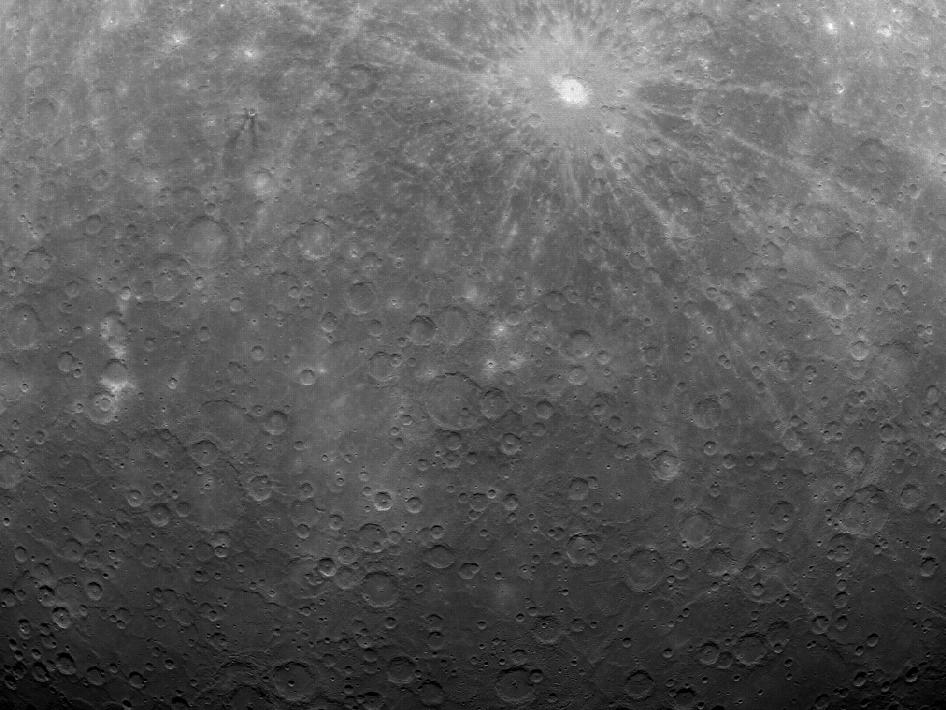 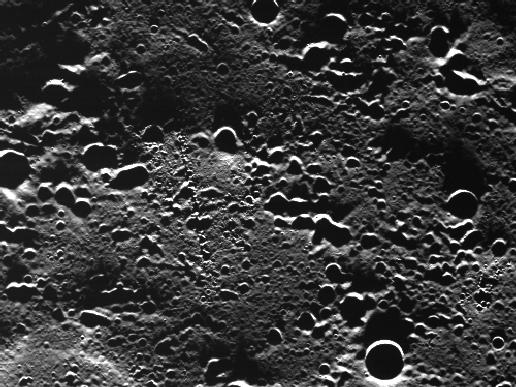 A First Look at Terrain Near Mercury’s North Pole

This WAC image showing a never-before-imaged area of Mercury’s surface was taken from an altitude of 450 km (280 miles) above the planet during the spacecraft’s first orbit with the camera in operation. The area is covered in secondary craters made by an impact outside of the field of view. Some of the secondary craters are oriented in chain-like formations.

This image was taken during MESSENGER’s closest approach to the sunlit portion of the surface during this orbit, just before crossing over the terminator. The oblique illumination by the Sun causes the long shadows and accentuates topography. The highly elliptical orbit of MESSENGER brings the spacecraft down to a periapsis (MESSENGER’s closest approach to Mercury) altitude of 200 km (125 miles) and out to an apoapsis (MESSENGER’s farthest distance from Mercury) altitude of 15,000 km (9300 miles). The wide-angle camera (WAC) is not a typical color camera. It can image in 11 colors, ranging from 430 to 1020 nm wavelength (visible through near-infrared). It does this with a filter wheel: the 11 narrow-band filters (plus one clear filter) are mounted onto a wheel that can be rotated to allow the camera to capture an image through each filter. In this image the 1000 nm, 750 nm, and 430 nm filters are displayed in red, green, and blue, respectively. Several craters appear to have excavated compositionally distinct low-reflectance (brown-blue in this color scheme) material, and the bright rays of Hokusai crater to the north cross the image. During MESSENGER’s orbital operations, we will typically use just eight of the WAC’s filters. This decision was made to reduce the amount of data that must be stored on the spacecraft’s solid-state recorder before the information can be downlinked. It’s also quicker than cycling through all 11 filters – the spacecraft is moving rapidly over the surface, and there isn’t much time to image the same spot on the surface 11 times over before moving to the next area of interest. The sets of color images will help us learn about the variation in composition from place to place on the planet. For example, some minerals such as olivine and pyroxene often absorb more light at longer wavelengths than at shorter ones, so we’ll be looking for their signatures in the reflectance spectra derived from each eight-color set. WAC images will be used in coordination with the Mercury Atmospheric and Surface Composition Spectrometer (MASCS), a hyperspectral instrument that provides reflectance information at many more wavelengths, but only for one spot on the surface at a time. Exploring the Rays of Debussy

Bright rays, consisting of impact ejecta and secondary craters, spread across this NAC image and radiate from Debussy crater, located at the top. The image, acquired yesterday during the first orbit for which MDIS was imaging, shows just a small portion of Debussy’s large system of rays in greater detail than ever previously seen. Images acquired during MESSENGER’s second Mercury flyby showed that Debussy’s rays extend for hundreds of kilometers across Mercury’s surface. Debussy crater was named in March 2010, in honor of the French composer Claude Debussy (1862-1918). An Annotated Guide to the First Orbital Image

This historic first orbital image of Mercury was acquired 37 years to the day after Mariner 10’s historic first flyby of the innermost planet. Labels have been added to indicate several craters that were named based on Mariner 10 images, as well as Debussy, Matabei, and Berkel, which were named based on MESSENGER flyby images. The surface contained in the white lines is terrain previously unseen by spacecraft, and the star indicates the location of the south pole.