Video pubblicato dalla stessa NASA:
A year’s worth of collaboration between NASA and U2 both in space and on the Irish rock band’s “360” world tour is highlighted in a new video produced by the group. In 2009, U2 approached NASA with the idea to include the crew of the International Space Station in its shows, and the astronauts agreed to participate in this unique experience. Bono, The Edge, Adam Clayton and Larry Mullen, Jr. spoke with the Expedition 20 crew on the space station several times before the astronauts recorded a video segment that U2 incorporated into its concerts. The crew members include Michael Barratt of NASA, Frank De Winne of the European Space Agency, Bob Thirsk of the Canadian Space Agency, Koichi Wakata of the Japan Aerospace Exploration Agency, and Gennady Padalka and Roman Romanenko of the Russian Federal Space Agency. 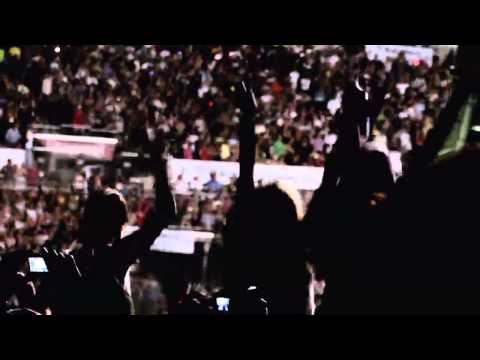 NASAxU2
NASA and U2 released a commemorative video highlighting a year’s worth of collaboration in space and on the Irish rock band’s 360 Degree tour. U2 approached NASA in 2009 with an idea to include a dialogue between the band and the crew of the International Space Station during U2’s world tour.