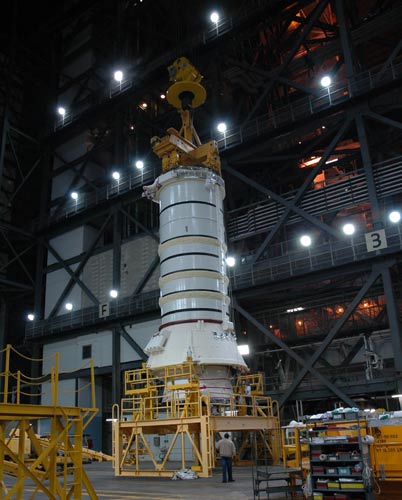 Engineers are looking under the insulation on the shuttle Discovery’s robot arm to make sure an inadvertent “bump” by a moving servicing bucket didn’t cause any damage.

The incident began when a light in the shuttle’s Orbiter Processing Facility hangar broke, raining a small amount of glass into Discovery’s open cargo bay. During work over the weekend to vacuum up the fragments, the safety rail around the top of a telescoping bucket used to move workers from point to point in and around the shuttle’s cargo bay bumped the 50-foot-long robot arm mounted along the left side of the bay.

Sources said it did not appear the incident caused any major damage, but the results of a detailed inspection are not yet known, according to a NASA spokeswoman.

During Discovery’s upcoming mission, the shuttle arm will be used to pick up a long boom equipped with cameras and laser sensors to inspect the shuttle’s heat-shield system after launch. In addition, two astronauts will ride about on the end of the boom during the first of three planned spacewalks as part of an engineering study to evaluate the extended arm-boom system’s stability. The idea is to find out if the system could be used for heat-shield repair work if such work is ever needed.

To help evaluate the loads on the arm-boom system, Discovery’s robot arm has been instrumented and engineers want to make sure the arm itself and the instrumentation were not damaged by the work bucket incident.