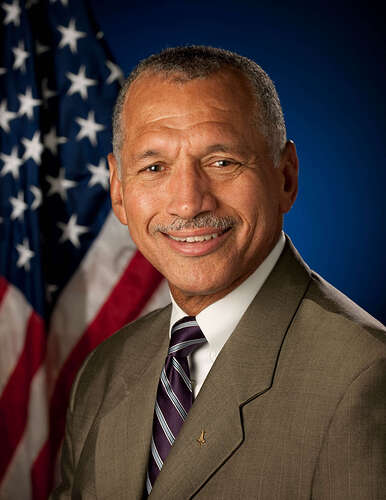 A 1968 graduate of the United States Naval Academy, he became a Marine Aviator and test pilot. After his service as an astronaut, he became Deputy Commandant of Midshipmen at the Naval Academy.

On May 23, 2009, President Barack Obama announced the nomination of Bolden as NASA Administrator and Lori Garver as Deputy NASA Administrator. Bolden was confirmed by the Senate on July 15, 2009. He was the first African American to head the agency on a permanent basis.

On January 12, 2017, Bolden announced his resignation from NASA during a town hall meeting at NASA Headquarters in Washington D.C. His last day would be January 19, and Robert M. Lightfoot Jr. was announced as acting NASA Administrator.