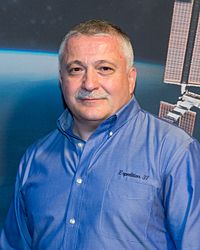 (Traduzione automatica) Fyodor Nikolayevich Yurchikhin (Russian: Фёдор Николаевич Юрчихин, Greek: Θεόδωρος Γιουρτσίχιν του Νικόλαου; born 3 January 1959), is a Russian cosmonaut of Greek descent, engineer and RSC Energia test-pilot who has flown on five spaceflights. His first spaceflight was a 10-day Space Shuttle mission STS-112. His second was a long-duration stay aboard the International Space Station (ISS) as a Flight Engineer for Expedition 15; for this mission he was launched in the Sojuz TMA-10 spacecraft. He has undertaken two further long-duration stays aboard the ISS, as a crew member of Expedition 24 / 25. For this mission he was launched with the spacecraft Sojuz TMA-19, and he landed in November 2010, also with the TMA-19 spacecraft. He served as Sojuz Commander for his fourth mission aboard Sojuz TMA-09M, as Flight Engineer for Expedition 36 and ISS Commander for Expedition 37. In April 2017, Yurchikhin launched on Sojuz MS-04 for the fifth spaceflight of his career, a six-month mission to the ISS as part of Expedition 51 and 52, for which he was the Commander.