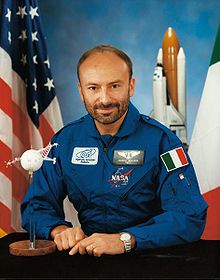 (Traduzione automatica) Franco Egidio Malerba (born 10 October 1946 in Busalla, Metropolitan City of Genoa, Italy) is an astronaut. He was the first citizen of Italy to travel to space.
After selection in 1989 as a Payload Specialist by the Italian Space Agency (ASI) and NASA, he became a staff member of ASI and was assigned to the NASA Johnson Space Center, Houston, Texas, for training. In September 1991, he was designated Prime Payload Specialist for the TSS-1 Space Shuttle mission. Malerba flew as the first Italian citizen in space on STS-46 (31 July 1992 to 7 August 1992).