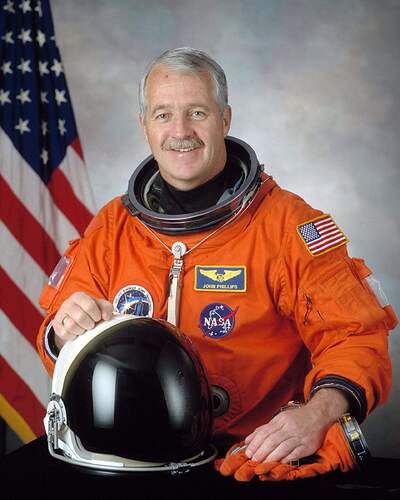 (Traduzione automatica) John Lynch Phillips is a NASA astronaut. Phillips is also a Naval Aviator and retired captain, United States Navy Reserve. Phillips has received numerous awards and special honors. He is a National Merit Scholar, graduated 2nd in his class of 906 people at the U.S. Naval Academy in 1972. Phillips has also been awarded the NASA Space Flight Medal, NASA Distinguished Service Medal, the Gagarin Medal and several others. Phillips has logged over 4,400 flight hours and 250 aircraft carrier landings, flying the A-7 Corsair II carrier-based light attack aircraft while on active duty in the Regular Navy and subsequently during his time as a Navy Reservist from 1982 to 2002. At the time of his retirement, Phillips had retained the rank of captain.