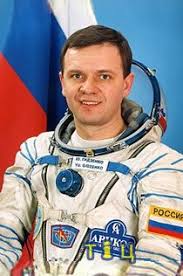 (Traduzione automatica) Yuri Pavlovich Gidzenko (Russian: Гидзенко, Юрий Павлович; born March 26, 1962) is a Russian cosmonaut. He was a test cosmonaut of the Yuri Gagarin Cosmonaut Training Center (TsPK). Gidzenko has flown into space three times and has lived on board the Mir and International Space Stations. He has also conducted two career spacewalks. Although he retired on July 15, 2001, he continued his employment by a special contract until Sojuz TM-34 concluded.