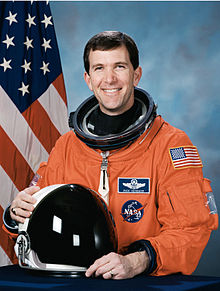 (Traduzione automatica) Rick Douglas Husband (July 12, 1957 – February 1, 2003) (Colonel, USAF) was an American astronaut and fighter pilot. He traveled into space twice: as Pilot of STS-96 and Commander of STS-107. He and the rest of the crew of STS-107 were killed when Columbia disintegrated during reentry into the Earth’s atmosphere.