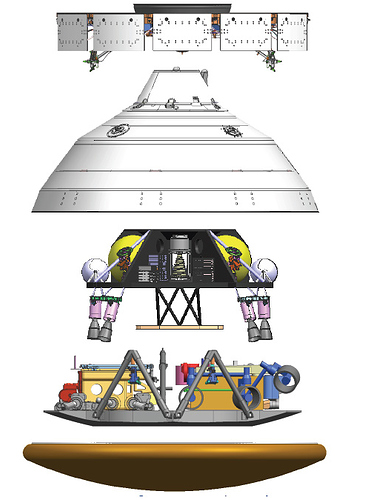 “One suggestion was that the new vehicle would be built in Europe and take a mix of European and U.S. instruments. NASA would provide the rocket to deliver it to Mars and provide the ‘Sky Crane’ landing system.”

“In April 2011, because of a budgeting crisis, a proposal was announced to fly only one rover in 2018 that would be larger than either of the vehicles in the paired concept, ExoMars (ESA) and MAX-C (NASA).[8] One suggestion was that the new vehicle be built in Europe and take on a mixed identity of European and American instruments. NASA agreed to provide the interplanetary rocket and the “Sky Crane” landing system. Despite the proposed reorganization, the goals of the 2018 mission opportunity would stay broadly the same: namely, to look for signs of past or present life by drilling into the soil and packaging or caching rocks that able to be lifted and dispatched to Earthly laboratories by a subsequent mission.”