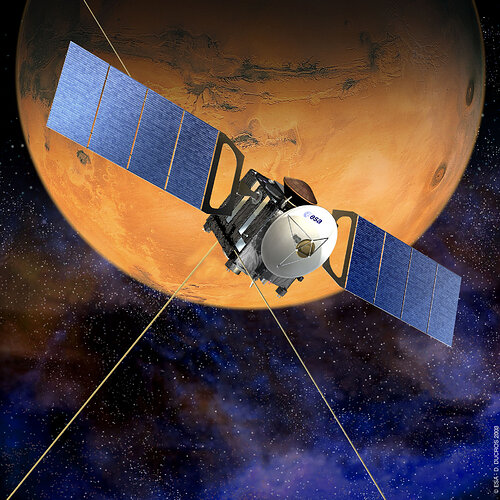 On 25 December 2003, Europe’s first Mars orbiter arrived at the Red Planet. Almost four years later, Mars Express continues to rewrite the text books as its instruments send back a stream of images and other data. Today, the spacecraft reached...

On 25 December 2003, Europe’s first Mars orbiter arrived at the Red Planet. Almost four years later, Mars Express continues to rewrite the text books as its instruments send back a stream of images and other data. Today, the spacecraft reached another milestone in its remarkable career by completing 5000 orbits of Mars.

During its mission to investigate martian mysteries, the orbiter has revolutionised our knowledge of Mars, probing every facet of the Red Planet in unprecedented detail. Some of the most visually astonishing results have been returned by the High-Resolution Stereo Camera (HRSC), which has produced breathtaking, 3D colour images of the diverse martian surface - with giant volcanoes to sinuous valleys and ice-modified craters.

One of the most surprising discoveries has been the youthful appearance of the country-sized volcanoes of the Tharsis ridge, suggesting they may have been active only a few million years ago. The images also show that glacial landforms are widespread over much of the planet, with glacial activity continuing in some areas until perhaps 20 000 - 30 000 years ago. Among the peculiar landforms imaged by HRSC is what appears to be a recently frozen body of water in Elysium, close to the equator.

While the camera has been imaging the surface in exquisite detail, other instruments have been examining different aspects of the planet’s environment. One of the most significant results from the Visible and Infrared Mineralogical Mapping Spectrometer OMEGA has been the discovery of clays, hydrated minerals that formed early in the planet’s history, when liquid water was fairly abundant. However, the presence of sulphates and iron oxides suggests that the planet subsequently became colder and drier, with only episodic eruptions of water onto the surface.

At the poles, OMEGA has measured the surface composition and produced unprecedented maps of water ice and carbon dioxide ice. Further insights into the martian poles have come from the Mars Advanced Radar for Subsurface and Ionospheric Sounding, MARSIS, which is revealing, for the first time, the secrets of the planet’s subsurface.

It has so far identified the presence of water ice deposits several kilometres underground and revealed fine, layered material near the poles. Similar soundings of the north polar cap have confirmed that it is dominated by water ice, with variable amounts of dust. The larger southern cap seems less dusty, but, with a maximum thickness of 3.7 km, it contains enough ice to produce a global ocean 11 m deep.

The multi-frequency radar has also been probing the upper atmospheric layer (the ionosphere) and found that the distribution of charged particles is linked with patchy magnetic fields in the martian crust.

Although Mars’ atmosphere is very thin, it plays an important role in the planet’s evolution, and new breakthroughs have been made possible by Mars Express. The Planetary Fourier Spectrometer (PFS) has made the most complete map to date of its chemical composition. Evidence for the presence of methane could indicate that volcanic activity, or even simple lifeforms may still be present today.

Meanwhile, the Ultraviolet and Infrared Atmospheric Spectrometer, SPICAM has provided the first complete vertical profile of the atmosphere’s carbon dioxide density and temperature. It has revealed a nightglow and aurorae at mid-latitudes, produced the first ozone map and discovered the highest clouds ever observed on Mars.

The Energetic Atoms Analyser (ASPERA) has confirmed that the solar wind is slowly stripping atoms from the atmosphere down to an altitude of 270 km, although the rate of loss is surprisingly slow.

The MaRS radio science experiment has studied surface roughness by pointing the craft’s high-gain antenna at the planet and recording the echoes. It has also been used to measure small changes in the spacecraft’s orbit caused by gravity anomalies. Some of the most marked increases in surface gravity have been found over the volcanic Tharsis ridge, indicating a higher-than-average crustal density. Another discovery has been the existence of an ionospheric layer created by meteors burning up in the atmosphere.

With the mission already extended until at least 2009 and the possibility of further extensions into the next decade, ESA is keen to ensure that Mars Express will continue to provide the best possible scientific return. In an effort to meet the needs of the various science teams with instruments on Mars Express, controllers at ESA’s Space Operations Centre in Darmstadt, Germany, are currently fine-tuning the spacecraft’s orbit.

“Between 18 November and 16 December, the thrusters will be fired five times to make minor alterations to the orbit,” said Tanja Zegers, Mars Express Science Operations Co-ordinator.

“This will ensure that HRSC and OMEGA will continue to have suitable lighting conditions for their observations in the future, while meeting the needs of the MARSIS scientists, who need observing time at night to look beneath the surface. It will also enable the imaging instruments to continue their programme of detailed observations, so that they can eventually complete the global mapping of the planet.”