NASA engineers continue to examine the issues surrounding a problem
related to the Advanced Camera for Surveys aboard the agency’s Hubble
Space Telescope.

Engineers received indications on Monday, June 19, that the power
supply voltages were out of acceptable limits, causing the camera to
stop functioning. The camera has been taken off line so engineers can
study the problem and determine the appropriate remedy. Hubble
observations are continuing using the other science instruments on
board.

“We believe we are very close to fully understanding the issue
experienced with the camera and we are going to resolve it,” said Ed
Ruitberg, deputy associate director, Astrophysics Division at NASA’s
Goddard Space Flight Center, Greenbelt, Md. “However, before we
proceed with any actions, we want to have a review board meeting to
assess both the trouble-shooting and the proposed solution.”

The board will meet at Goddard Thursday, June 29, to decide the best
course of action. Engineers anticipate instrument observations will
resume no earlier than July 3, with no degradation to performance.

Hubble managers will host a media teleconference Friday morning.
Details will be announced following completion of the review board
meeting, which may continue throughout Thursday. Audio of the
teleconference will be streamed through the NASA Web Portal at:

This third-generation instrument consists of three electronic cameras,
filters and dispersers that detect light from the ultraviolet to the
near infrared. The instrument was installed during a March 2002,
servicing mission. It was developed jointly by Goddard, Johns Hopkins
University, Baltimore; Ball Aerospace, Boulder, Colo.; and the Space
Telescope Science Institute, Baltimore. For information about the
Hubble Space Telescope, visit: 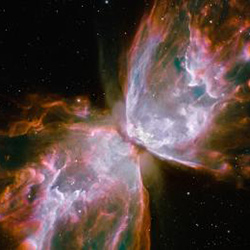 Breathtaking photos and science-changing discoveries from 25 years of exploration.